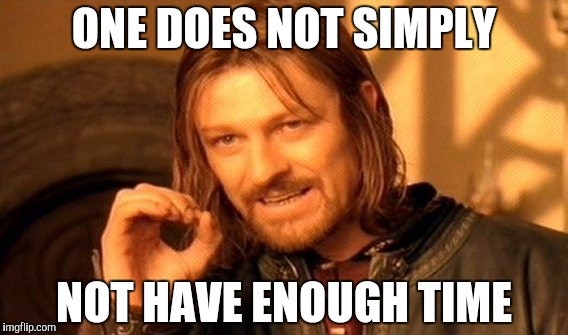 The art of finding time.

I was out for drinks a few weeks back for a friend's birthday, someone I've known for over twenty years now, and the conversation turned - as it often does after a few beers - to life, being 'grown-ups', and where we'd all ended up in the world. This friend's partner - a new inclusion to the group, and particularly adventurous - asked us what we'd be doing with ourselves if money was absolutely no object; if we could just wake up tomorrow and start doing whatever it was that really drove us.

It took me a few moments  to think about this - to weigh up all the things I really enjoy doing - but eventually, my answer was that I'd be writing and producing feature films; whether that was getting my own work produced through Octopod, or working with other people to make their films happen.  As much as I love shorts and writing for TV, the idea of making our first feature film still fills me with a crazy excitement that I can't quite explain. Every time I'm at the movies and the opening credits roll, there's always a little buzz as I think, 'one day, that's gonna be my film up there on the big screen'.

The next question was much easier to answer - so easy, in fact, that it shocked me. What is that that's stopping us from making this happen? What's holding us back? Of course, there are always lots of circumstances in life that make it difficult to get projects off the ground - family, work, paying the bills, the right script, the right team, actually trying to maintain a work-life balance - but the first thing that occurred to me, that felt more pressing (and crushing) that the others, was time.

Time would allow us to sit down and focus on developing a really strong idea; something we know we can shoot with our people and our resources. Time would mean that I wasn't so exhausted after a long week at work, and would still have the brain power to write something really good; something that we knew we wanted to invest our resources into - not just something 'shootable'. Time would allow us to meet up with our actors and collaborators and work out how to put this project together; to call in favours and start getting some buzz. And then once the ball was rolling, everything else would follow.

Yes, it sounds oversimplified -  but right now, when I drill it all back, that's personally what I feel is holding me back.

I've been pondering this ever since -  how the hell do you find more time? And not just time, but time when you've got the energy levels and brainspace to actually be productive? When you can't just quit your job and throw everything you have into your project?

I'm not saying I have the answers just yet - but actually being able to pinpoint this factor has been a huge revelation for me. I'm trying to plan better. To investigate ways I can 'create' more time. To push myself into being more disciplined, whilst also being realistic about what I can do.

Will it help? I hope so. It still feels like a small step - but I guess knowing your enemy is the first step towards defeating it, right?